From Art to Ink - The History of Tattoo Styles

The origin of Japanese artwork that translated into tattoos, traces all the way back to 10,000 BC - 300 BC.

The Japanese would mark their bodies and faces with fish and shells as a sign of protection or used as a ranking mark within their tribe. The indigenous Ainu tribe, from the Hokkaido region would receive cosmetic tattooing around the mouth as a symbol of sexual maturity. Girls within the tribe would receive tattoos between the ages of 10 and 13, some who continued until they were married.

The art was frowned upon by the Japanese government as they deemed it being ‘harmful to public morals’, however they had little to no luck with preventing the tattooing.
During the 19th century the Japanese authorities attempted to stop all tattooing to maintain a clean image for their society. The tattoo stigma in Japan shifted to marking those who had committed crimes, by printing the kanji strokes to create the symbol for ‘dog’, each line representing a different crime the individual had committed.

The theme of a traditional Japanese piece centres around representations of legendary heroes, religious symbols and motifs, decorated with symbolic animals and floral features.

The obsession with Japanese artwork in Europe during the 1870’s, influenced artists like Monet, Van Gogh and Degas to create their own pieces with Japanese technique and traditional patterns. 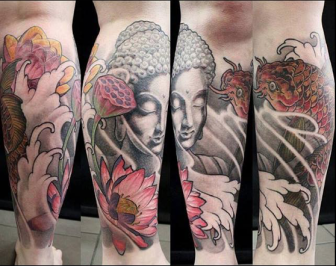 To create your ideal Japanese print, head down to Victims of Ink this Winter! We're open 7 days a week from 11am-8pm. If you would like a consult with one of our artists, you're welcome to book in a time to discuss your ideas and designs.

We hope to see you soon!

BACK TO ALL ARTICLES